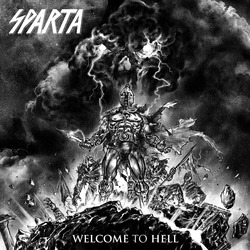 Sparta is one of the more obscure bands of the glorious New Wave Of British Heavy Metal period. The band was formed in late 1979 by Tony Foster on lead guitar. The line-up was completed by Tony Warren on bass guitar, Karl Reders on vocals, Steve ‘Snake’ Reders on guitar and Paul ‘Radge’ Reders on drums.

For those who are in need of some good ole’ hard rock, buy this album. Although I have my doubts on the cover, the overal quality of the music is good, though a bit naieve and old-school. (listen to “Dreaming Of Evil” and you will understand me 🙂 But who cares. Release on the 28th of february 2014.