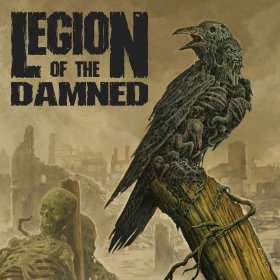 Ravenous Plague was released by Napalm Records on the 3rd of january 2014. It is the  8th full length album of “Legion of the Damned”.

Back in 2004, when LEGION OF THE DAMNED rose from the ashes of OCCULT in the Dutch city of Venlo, the music scene yearned for pure and brutal Thrash Metal. In 2005, Maurice Swinkels (vocals), Erik Fleuren (drums), Twan Fleuren (bass) and Richard Ebisch (guitar) teamed up with producer Andy Classen and entered his Stage-One-Studio (Nordrhein-Westfalen, Germany) in order to record »Malevolent Rapture« – a real classic of Euro-Thrash!

2014 might prove to be yet another pivotal year for LEGION OF THE DAMNED, because »Ravenous Plague« makes it more than clear that the evolution of the band is far from over. The return to Andy Classen was a great move, as nobody else knows the band better than his renowned producer.