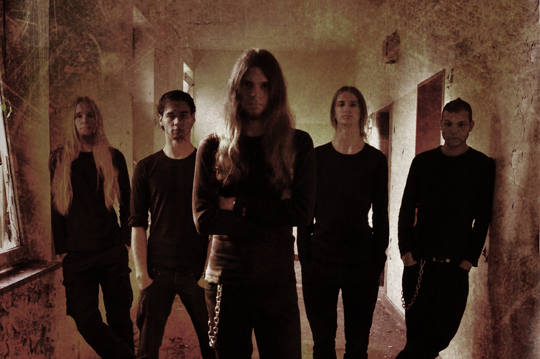 “Incendium” is the second album of the athmospheric German death metal band “Burial Vault” and it has become quit a voyage to the dark an misty fields of the human mind. It is intense, dramatic and full of musical and thematical changes.

The very nature of the album reflects the vision of the band about the current society which has become completely unfavorable, unwanted to live in. Dystopias are often part of a fictional universe, therefore a back story of how this world came to be or how it evolved (or de-volved) from our current world is necessary. The back story explains how the shift in control came to occur, with the end result being changed societal norms or a government now run by corporations, totalitarian dictatorships or bureaucracies.

“The record is conceived as a full-on concept and is highly influenced by ‘Fahrenheit 451’ by Ray Bradbury, a classic in dystopian literature. The quintet uses both the music and the lyrics to describe the change of a man from a blind follower to a critical antagonist in a near future within four suspense-packed chapters.”

Fahrenheit 451 is a dystopian novel by Ray Bradbury published in 1953. It is regarded as one of his best works.The novel presents a future American society where books are outlawed and “firemen” burn any that are found. The title refers to the temperature that Bradbury understood to be the autoignition point of paper.

This is very, very good stuff !

Chapter I:
01. The Stench Of Burning Thoughts
02. A Blind Follower And A Watchful Hound