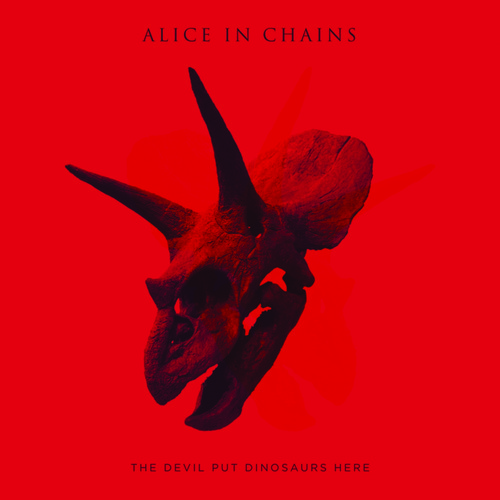 I have to admit : I am, sorry, I was a big fan of Alice In Chains. Albums like “Dirt” and “Jar Of Flies” will always have a prominent place in my top 100 of best metal albums ever. So, I was a quit a bit curious about this new one. I remember a concert on graspop 2 years ago and allready there they surprised me.

So 6 months after the release (24th of may 2013), I’m writing this post about their (new) album “The devil put dinosaurs here” (what’s in a name ?).  This is a really good album that builds on the past of the band but does not copy it. Highlights are “Hollow” and “Stone”.

The Devil Put Dinosaurs Here is the fifth studio album by the American rock band Alice in Chains, released on May 28, 2013. It is the band’s second reunion album.
Following a worldwide tour in support of its previous album, Black Gives Way to Blue (2009), Alice in Chains began work on a new album. The making of The Devil Put Dinosaurs Here lasted for more than a year and the release of the album was delayed numerous times. The band entered the studio in July 2011 to start work on their fifth album.
During the writing and recording sessions, guitarist Jerry Cantrell underwent shoulder surgery, which resulted in the delay of the album. The recording sessions of The Devil Put Dinosaurs Here were completed in December 2012.