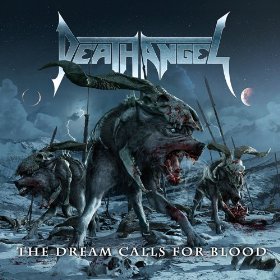 The latest of Death Angel “The Dream Calls For Blood” was released  on the 15th of october 2013 through Nuclear Blast. It is the seventh album of this Californian based trash metal band.Death Angel have been around since 1982 until 1991 and rised again from the dead in 2001.

“The title is basically our motto. It’s what we’re talking about, you know. In our point of view the dream being our band and keeping the band going and making music for your life. The blood is all the sacrifice and all hard work that goes into it and that’s the metaphor for that. It’s not only meant for music. It’s also meant for other people to relate in their own life and goals that they’re trying to achieve and the sacrifices that it takes to achieve these goals. And along with that, there’s also a tinge of aggression in there about other people that cut corners and don’t quite go through all the steps it takes to achieve the goal the right way. So there’s a little bit of a middle finger to those people that go about it that way and don’t fully respect what it takes.”