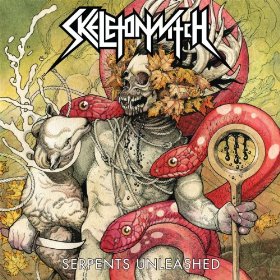 2013 brings us to “Serpents Unleashed,” the group’s fifth and latest release. Recorded with Kurt Ballou (Converge, High On Fire, Isis) in Salem, Mass. (insert bad “witch” joke here), the album – which features artwork by Baizley, who returns to the fold for the first time in six years – is another blistering helping of two-and-a-half minute blasts of blackened metal amalgamation. This time around, the band also shows off a few new tricks – note the Scandinavian doom-vibe in the opening of “Unending, Everliving” and the devil’s swing of “This Evil Embrace” – but does so without compromising the frosty/fiery/abominable metal spirit or blue-collar humility that has endeared them to so many over the past decade. Ultimately, it’s both a fitting testament to what they’ve accomplished to date, and an exciting nod toward what the future has in store.

This album is really awesome but needs discovering.  You should listen to it several times to appreciate the technicity of the guitars, the grinding and devastating drums and the near death vocals of the singer Chance Garnette. The album was released on the 28th of october by Prosthetic Records.
http://www.amazon.com/Serpents-Unleashed-Skeletonwitch/dp/B00G5SKW0O