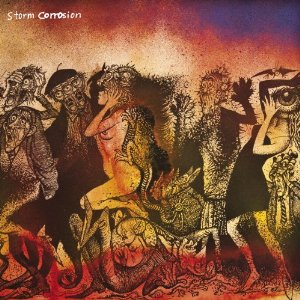 Storm Corrosion is the long-discussed and highly anticipated collaboration between two of the modern progressive rock scene’s most innovative and multi-talented artists: Mikael Ãkerfeldt of Opeth and Porcupine Trees Steven Wilson.
“It s very hard to describe this music as it is so different from most things around right now (at least as far as I know),” said Wilson. “I said it was the “opposite of metal” because I think a lot of people might have assumed from the two people involved that this would be some kind of progressive / metal thing, but in fact it s quite a minimal album with a lot of space and beauty, orchestral and organic, hardly any drums and no distorted guitars “twisted beautiful” is the best way I can describe it.”

“Some of the music on this record I think is the most beautiful music I have participated on ever,” adds Ãkerfeldt. “There’s some magical sections on there. Musically I think we’ve created something earthy, a bit frightening, exhausting, profound and rather intense.
All at the same time. I can safely say I don’t know any other band or artist that sounds anything like Storm Corrosion. I guess that was also one of our goals, so to speak.”
[soundcloud url=”https://api.soundcloud.com/tracks/52394363″ params=”color=ff6600&auto_play=false&show_artwork=true” width=”100%” height=”166″ iframe=”true” /]