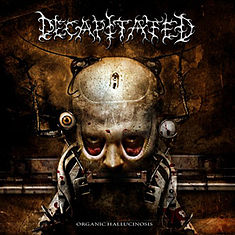 Spheres of Madness is one the strongest, hardest and most badd ass albums I listened to for many years !

First of all, it’s fast. It’s faster than you ever heard. The metal produced by this Polish metal band is faster than you can imagine. Of course, I know a lot of band doing more than 220 bpm but this one is different. Even at moren than 200 bpm, you still here the song’s structure. The riffs are technical , accurate and with the howling voice of newcomer at that time Adrian “Covan” Kowanek.

“Day 69” is one of my favourite death metal songs of all time. Especially the drums and guitars are impressively accurate and relentless. Go to 2:17 and hear the drum solo !!!

Organic Hallucinosis is the fourth studio album by the death metal band Decapitated from Poland. The album was released in 2006 on February 7 in the United States, on February 13 in Europe, and on February 22 in Japan. The release was followed by a European and North American tour.